If you want : Peter talking to OGN30 about SCANPI in mp3 format.

The scanpi has moved into a cupboard and then back out to a new place in the past week. It's so much easier to move about than the 200 vinyl, 7 boxes of tapes and 300 CD's that it has [enhanced/replaced*]. 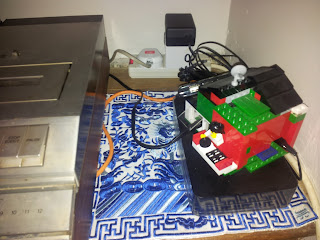 Someone (step forward Mr Chris Walker) sensibly said (and I quote) "you may want to look into Mopidy (https://github.com/mopidy/mopidy). It runs on the Pi, has spotify and local backends, and can be controlled remotely via HTTP or the MPD protocol. Might fit well with the scan -> track frontend...". He's not wrong you know, but we will need to allocate some currently non-existent time to doing that. Something for Q2 2013 methinks.

Yesterday, some moments after the previous post on thoughts regarding Spotify integration and the like, Engadget wrote a thing which was re-tweeted by the Pi people. It's like someone was listening to me and then attempting to make a thing. Like that, not exactly that you must understand! Left us wondering if we could do the same again with other thoughts on the thing.

Overnight, some more thinking along the lines of "Other ways to physically interact with your digital music". A few bad but plausible ideas listed here for fun.

Theory here would be for an XBox connect (or similar camera sensor thingy) to be the controller of the album / band selection process. Examples include;

Would certainly be fun watching ones mother-in-law attempting to make a banana shape in order to get her favourite Velvet Undergroun track to play?

Instead of finding the relevant item by scanning it's barcode, why not *just* take a picture of the cover, fire that into musicbrainz as an image and get Google's image search function (other suppliers of this kind of technology exist) to match the relevant cover? This would conveniently work for older music which has no barcode.

Wave it at the thing

If we combined the above two (to some extent), we might end up with a passive always on camera which took a picture of the item that the user stuck in front of it, matched up the album using the musicbrainz image search, and allowed some form of additional interaction in order to pick the track to play (hold up fingers? [limited to 10], point to that position on clock? [limited to 12], arrange tracks in a circle [needs a display] and get the user to point?).

Brilliant, so I hope to hear about someone doing all or some of the above in the very near future! Comment below, or email me at the usual address if it's you!

A bit more than a week since I chatted on behalf of SCANPI to the overly populated Oxford Geek Night and some thoughts have occurred. In general the talk went well, the story was told, and the laughs seemed to arrive at the relevant moments. The presented slidy now is available on the OGN site, or here.

Definitely a stopper for 2), but not necessarily for 1) then.

It'll be time to make some form of action where there is only thinking at the moment. We'll tell you when that happens - or shout (via the usual means) if there's something else that you feel we should look at.

Partly in preparation for speaking at OGN #30, and partly for good practise / "it's about time", all the current code from SCANPI has been committed to bitbucket.

Available immediately for download / clone / reproduction on your own PI:

While all files are in current working order, I am certain that they are not perfect. All comment, improvements, simplifications, etc positively encouraged. Shout at me peter [dot] arbuthnott [at] gmail [dot] com.

A 'sneak' preview of the slides I'm going to present at said OGN #30 is available at : http://www.scanpi.co.uk/scanpi/slidy/.

At the weekend, I went to that there London. A friend had his house all set up with Skifta a DLNA compliant integration thingy. Some initial thoughts on that platform made for interesting crossover with what SCANPI is already doing for me.

Short summary: I need to read more about http://www.dlna.org/ and perhaps copy and paste some stuff to make a SCANPI installed PI a compliant device? (BOTH a device which knows about content AND a device to which content can be sent/played).

Following our acceptance to talk at OGN30, we have begun work on some slides. It don't half focus the mind into making things make sense to the outside world. As a sneak preview - the *key* slide *might* look a bit like this: 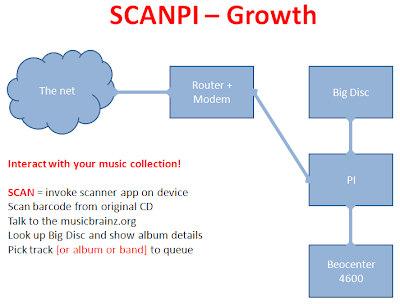 You may (should) know about this already, but it's a thing that we only saw a month or so ago and have stuck some details in place on scanpi. As you do; humans.txt for scanpi.

Comments as always welcome via the usual channels.

SCANPI has confirmed an opportunity to talk to you all at Oxford Geek Night number 30 (http://oxford.geeknights.net/). It's upstairs at The Jericho Tavern on the 13th March (the date will be updated on the OGN website within the next day or so).

We're in the microslots and are now discussing what will fit into the 5 minutes allocated. If there is something specific you want to hear about, shout (or whisper) into the comments.